"Am I not good enough?"
This page is missing some information or isn't up to date. If you'd like to help add to the article, edit this page as needed.

HoneyWorks Premium Live (ハニワークスプレミアムライブ, haniwaakusu puremiamu raibu), abbreviated to HaniPure/HoneyPre (ハニプレ), is a rhythm game developed by Akatsuki Inc. for Android and iOS platforms. The game was announced on August 24, 2019 as part of the larger HoneyWorks Atelier project celebrating the group's tenth year as an active music circle, and was originally released on November 18, 2020.

News of a rhythm game containing HoneyWorks songs has gone as far back as March 2017, where it was announced alongside a "new HoneyWorks television anime" (eventually becoming Itsu Datte Bokura no Koi wa 10 Centi Datta.) as projects in development [1] . Eventually, the game was also among announcements for the HoneyWorks Atelier celebration.

The game features songs from across HoneyWorks' collective discography, in particular songs and characters from Confession Executive Committee as well as other sub-franchises HoneyWorks created such as Dolce and a handful of PVs made for CHiCO with HoneyWorks. The game also comes with recolored and remastered/reworked versions of the earlier songs' original PVs. With the exception of three songs, most of the ones featured in-game use the seiyuu or band versions instead of the Vocal Synthesizer ones.

Other content featured in the game consists of stories concerning the Confession Executive Committee cast, and their various platonic and romantic relationships throughout their high school years. These stories can be accessed as either events to play or through "Precious Stories", which need tickets. It is also possible to unlock the full versions of all PVs featured in the game.

When the game is first booted up, Panmy and Kumamaru ask the player to input their name and birth date. The birth date in particular is used in a daily horoscope, as the astrological sign the player's date is under gives off a random fortune including a "Lucky Song" that gives you a better chance of clearing the stage or other goodies.

The main content of the game lay in Live mode. Here, players are encouraged to complete various beat maps of HoneyWorks songs. To play, the player uses their touch screen to accurately hit one of three types of notes-- a tap note (green), a tap-and-hold note (pink), and a drag note (blue). Each song has four levels of difficulty, ranging from Easy, Normal, Hard, and Expert. Completing these stages allows the player to unlock various cutscenes involving the subjects of the songs, in parts of up to fifteen, but is also possible to unlock the cutscenes using Tickets. Playing a stage costs players Hearts, and using up all hearts at the moment restricts you from completing any further lives.

Premium Live also relies on a Fan system to access more songs. Fans can be obtained once a day by logging in, but players can amass more fans by playing Lives. The more Fans a player amasses, the more levels they can unlock. The Fan system occasionally results in prizes the more milestones a player hits. One can see what rewards a player can get by tapping the Success Road option on the main screen.

In order to help you complete stages, you are given a set of Characters with Rhythm, Technique, and Skill stats each affecting the three types of notes on the beat maps, as well as a special ability. When completing Lives, Characters can gain experience points depending on how well you performed, but have a cap-off point depending on their ranking (ex. 4-star characters cap off at 40, 2-stars at 20. etc.). In the Characters menu, players can edit their team to have up to six characters and then store them in a Deck. Each player has a maximum of ten Decks to store teams.

Like many games of its time, Premium Live features a Gacha to roll for more characters. You can roll using Gacha Points or HoneyDiamonds (1 roll for 250, 10 for 2500). Each gacha will give out one free roll to start, but players must pay for subsequent rolls. 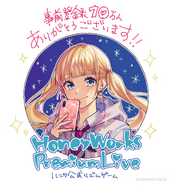