"Am I not good enough?"
This page is missing some information or isn't up to date. If you'd like to help add to the article, edit this page as needed.

"Namaiki Honey" is the 35th PV in the Confession Executive Committee song series. Returning focus to Ken Shibasaki and Arisa Takamizawa after their respective character songs, this song acts as their sequel. The full song was originally released at Comic Market 94 on the single Namaiki Honey/Renai Joujyuu as the A track.

While Arisa previously was hurt by what she perceived as Ken deceiving her in the previous song, she has finally worked up the nerve to begin a proper relationship with him. However, she insists that she wants to take it slow and start off as friends. Ken, happy that she wants to bond with him at all, agrees. For the rest of the song, Ken pines over her, admitting he loves her prickly and hard-to-get sides and treasuring every moment they have together. He still keeps in contact with her through LINE, and his giddiness over talking to her every night ends up freaking his younger brother out. Ken and Arisa have a small get-together one day in the park, which evolves into a date.

In the PV, the scene where Arisa stands on the steps to her shrine overlooking Ken deliberately mirrors the end of "Ijiwaru na Deai", but with the situations reversed. In "Ijiwaru", Ken is on the stairs looking down at Arisa and gives his confession; she says nothing and walks right past him, implicitly rejecting his advances. In this song, Arisa is the one giving the confession this time around and Ken is the one who doesn't respond, but when Ken goes up to meet her he embraces her and accepts her feelings.

This is the story of an earnest love-
Real love, not a game
The ill-tempered meeting shook the couple's hearts

A cold, hard-to-get, prickly girl
I can't help but want to protect that awkward personality
"If I had to say whether I liked or hated you,
I'd probably say I liked you."
Your voice, working its hardest,
makes my heart soar.

"But as friends, okay?! It's my first time and all..."
But the truth is, I'm the same.
I've never felt like this before

From not on, our love is special
A real love- not a game
We're in no rush, let's take our time
Ah, because you were there with me
I was able to change

"When I have more confidence, the confession will come from me!"
The way you are is so cute, I'll wait forever
"Even though you're a distraction..."
you say, but you're looking away and up at the sky
with that brazen mouth of yours

I'm going to make you say "I love you"
I'm on LINE every day now
Just before I fall asleep, my album fills up
It's become a treasure

I fall in love with you every day
A real love I won't give up on
Only I know how cute you are, the things I love about you
Ah, because you're here,
I can smile

Your ill-tempered words shook my heart
Coming from the top of the stairs, I heard
"I like you so much, it's scary!"

Us two are special
It's real love, not a game
We're in no rush
Let's take our time
Ah, you are my prideful, brazen honey 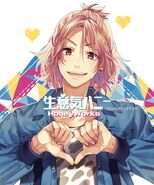